Colorado State University researchers provide the most detailed accounting to date of greenhouse gas emissions from the cannabis industry. And the results are impressive. The legalization of cannabis, which is currently underway in the world, could cause CO2 emissions to explode.

It’s no secret that the US cannabis industry is a massive cash cow with its $ 13 billion. The environmental impact of this growing sector is less obvious to some people, with the form of greenhouse gas emissions from commercial production, mostly indoors.

A new study by researchers at Colorado State University provides the most detailed account to date of the cannabis industry’s carbon footprint, a sum around which there is little understanding. What is clear, however, is that consumer demand for cannabis is insatiable and shows no signs of slowing down as more states engage in legalization.

A neglected carbon footprint of cannabis

The study, published in Nature Sustainability, was led by graduate student Hailey Summers, whose advisor, Jason Quinn, is an associate professor in the Department of Mechanical Engineering. Summers, Quinn and Evan Sproul, a mechanical engineering researcher, performed a lifecycle assessment of indoor cannabis operations in the United States, analyzing the energy and materials needed to grow the product and accounting for emissions from corresponding greenhouse gases.

They found that greenhouse gas emissions from cannabis production are largely attributed to the production of electricity and the consumption of natural gas from indoor environmental controls, high-intensity grow lights, and supplies. into carbon dioxide for accelerated plant growth.

“We knew the shows were going to be big, but because they hadn’t been fully quantified before, we identified it as a great space of research opportunity,” Summers said.

The CSU group’s efforts update previous work by researchers at Lawrence Berkeley National Laboratory, who quantified small-scale cultivation operations in California and preceded the state-by-state legalization cascade since Colorado was the first to legalized in 2012. To date, 36 states have legalized medical use of cannabis, and 15 have legalized recreational use.

The CSU team assumed that there would be substantial variability in emissions depending on where the product was grown, due to climate as well as emissions from the power grid. Their recently published work captures the potential spread across the country of large commercial warehouses for growing cannabis, and models emissions for several high-growth locations across the country.

Their results include a map that shows relative emissions across the United States, defined as emissions per kilogram of cannabis flower. They also developed a GIS map that allows users to enter a county name and find local emission estimates. 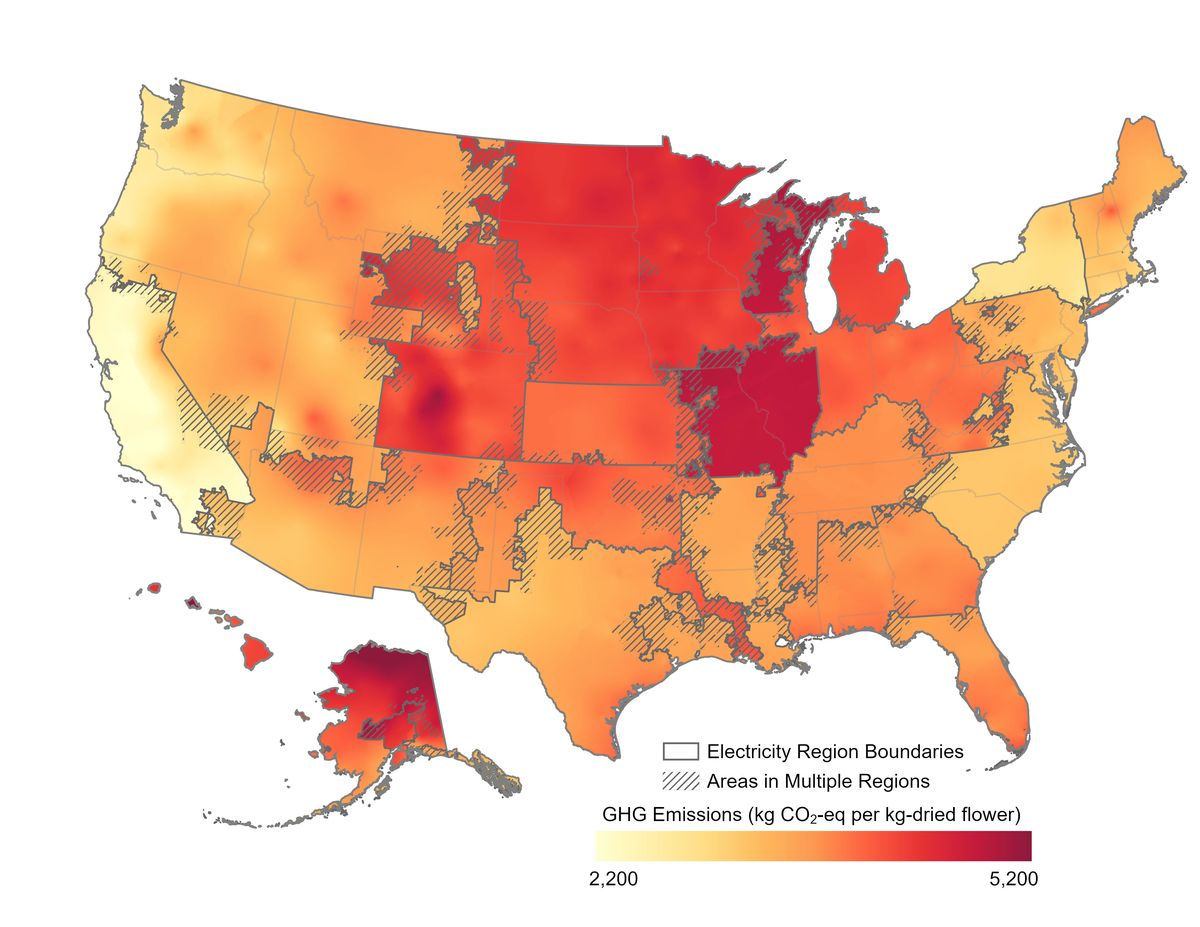 Their research shows that growing cannabis indoors in the United States results in lifecycle greenhouse gas emissions of between 2,283 and 5,184 kilograms of carbon dioxide per kilogram of dried flower. Compare that to emissions from the use of electricity in growing cannabis outdoors and in greenhouses, which are 22.7 and 326.6 kilograms of carbon dioxide, respectively, according to the New Frontier Data 2018 Cannabis Energy Report.

These outdoor and greenhouse numbers only take into account electricity, while the CSU researchers’ estimate is more complete, but the comparison still highlights the gigantic carbon footprint of indoor cannabis growing operations.

The demand for cannabis is insatiable

The researchers were surprised to find that heating, ventilation, and air conditioning systems were the biggest energy demand, with numbers fluctuating depending on the local climate, whether in Florida, which requires excessive dehumidification, or in Colorado, where heating is more important.

The high energy consumption of cannabis is due in part to the way the product is regulated, Quinn said. In Colorado, many grow operations have to be near retail storefronts, which has sparked an explosion of energy-hungry indoor warehouses in urban areas like Denver. According to a report from the Denver Department of Public Health and Environment, electricity consumption from growing cannabis and other products has increased from 1% to 4% of Denver’s total electricity use between 2013 and 2018.