New restrictions with the arrival of the South African variant of Covid-19 in Madagascar. But this will not be enough, because only early treatment is effective.

Positions of mutations identified in the new South African variant shown in red on the structure of the SARS-CoV-2 spike protein (PDB: 7a94). The N-terminal domain and the receptor binding domain of the tip are shown in shades of blue and green, respectively. The remaining part of the spike protein and the human ACE2 receptor are in gray and black, respectively - Credit: Godzik lab, UC Riverside.
Publicités

From April 5, 2021, Madagascar will again enter the state of health emergency for a period of 15 days. There is no lockdown at the moment, but restrictions. A curfew from 9 p.m. to 4 a.m., gatherings limited to 100 people and the cordoning off of the main affected areas with Analamanga, Sava and Antsiranana.

The number of cases has increased, but it is not a massacre either. We went from 30 cases on average to 250 to 300 cases per day. We will say that 10 times more, but 300 cases per day on a population of 25 million remains manageable. The Malagasy government, like many western countries, uses the same methods as last year and unfortunately it never worked.

Seen as it is, the peak of the epidemic is yet to come knowing that an outbreak lasts about 4 weeks. So the number of cases will increase as well as the number of deaths. But lockdown never worked and it won’t. There are also serious doubts about surgical masks.

And I don’t see the point of a curfew, why would the virus circulate faster and infect more people overnight? It is not a virus that only works 12 hours a day as far as I know. One could explain it by nightclubs and bars, but that does not justify the curfew.

In July 2020, Madagascar had its peak of the first outbreak with strict lockdown for two weeks and this has not had a noticeable effect on decreasing cases. Epidemics have their own will, they will have their bell curve. They will appear and disappear without the human being being able to have a noticeable effect.

What we can do, on the other hand, is limit the damage, especially severe forms and deaths. And there is only one solution, massive testing with the right interpretation of the results and early management of the disease. This is the only way to do it. Madagascar has promoted CVO + based on artemisinin, Ravintsara and magnesium, but there are also other treatments such as hydroxychloroquine, azythromicin and ivermectin.

The latter gives remarkable results both for treating patients and as a preventive measure. We do not know what is the treatment protocol favored by Malagasy doctors and hospitals, because precisely, we avoid giving the name of drugs so that people use them en masse with the risk of overdose. Ivermectin is inexpensive and its side effects are minimal.

And there, a question arises, what is the point of closing the borders with the outside for a year if it is to be fooled by illegal immigration which, not only, is not welcome, but we brings a variant of the Covid which is much more dangerous and which plunges the entire population into shit?

The president also announced that Madagascar was now part of the Covax program and the government had chosen two vaccines against covid. He did not specify which ones and this vaccine would not be mandatory and that the priority would be to vaccinate medical personnel, law enforcement and the elderly. However, this is strange, as it is not known whether current vaccines work against this South African variant.

This variant, like the UK variant, shows important mutations in the Spike protein which is the main target of vaccines such as that of Astrazeneca or Pfizer. And many studies show that the South African variant weakens the immune response and therefore the vaccines as a result. 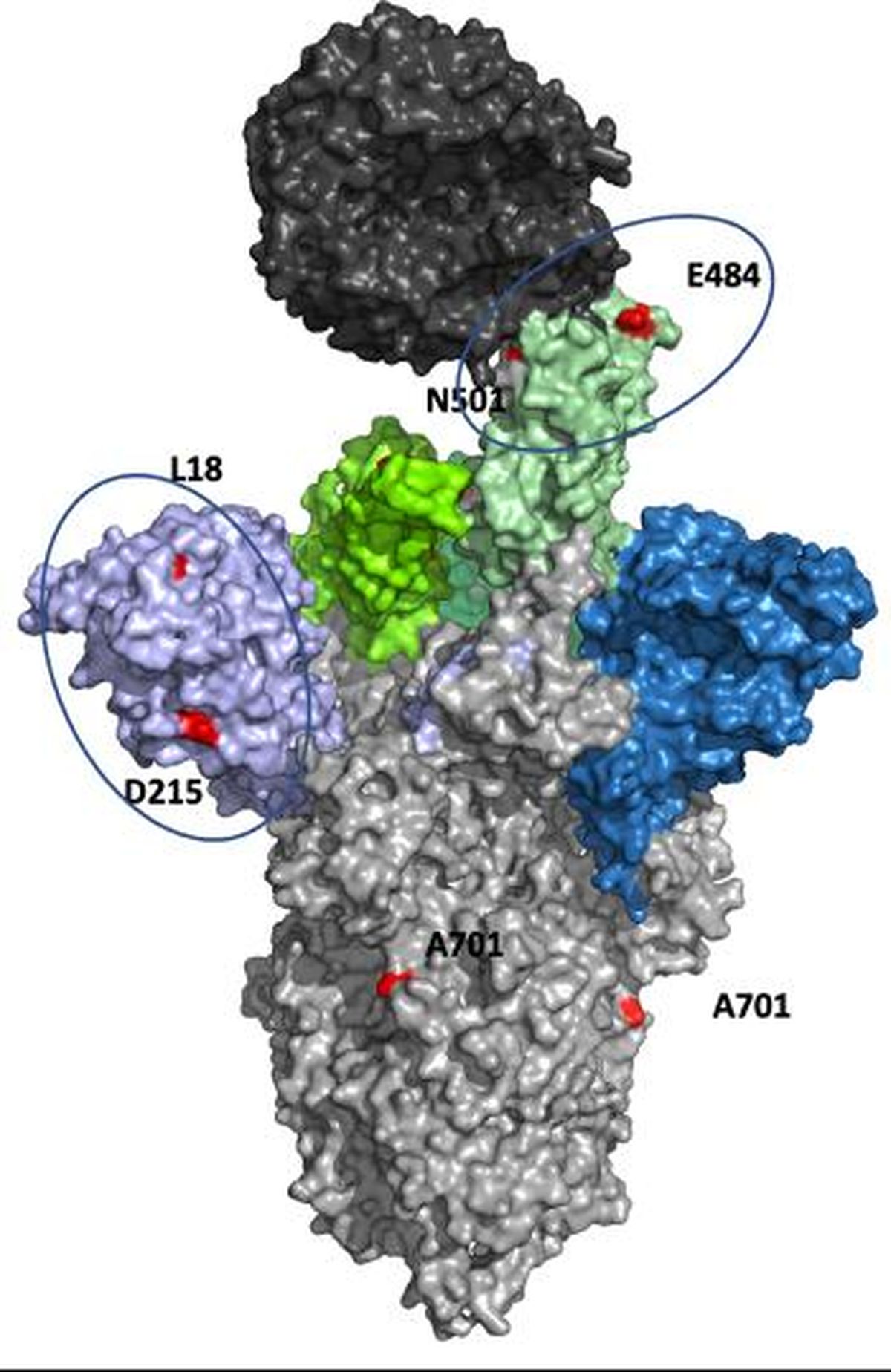 Positions of mutations identified in the new South African variant shown in red on the structure of the SARS-CoV-2 spike protein (PDB: 7a94). The N-terminal domain and the receptor binding domain of the tip are shown in shades of blue and green, respectively. The remaining part of the spike protein and the human ACE2 receptor are in gray and black, respectively – Credit: Godzik lab, UC Riverside.

One can also think that the refusal of Madagascar to have wanted to vaccinate its population, led to international pressures, in particular vis-à-vis international aid. But whatever vaccine you choose, it should be considered a subscription. Viruses mutate, that is their nature and therefore, there will inevitably be new variants that will continue to appear. And therefore, vaccines will have to be constantly adapted to integrate the variants.

And so, you will have to get vaccinated every 3 months if you want to be protected against all the variants. It’s the same with the flu, because every year you have to get vaccinated and the coronaviruses mutate faster than the flu virus. It’s an endless game where you’ll spend your time getting vaccinated. In addition, these are new vaccines and Covax, for the moment, is promoting the AstraZeneca vaccine to death, which causes thrombosis problems.

Knowing that we see the side effects of a vaccine that after 18 to 24 months and by then, it will be too late. Also, let’s not forget that vaccine makers have achieved full immunity against possible side effects, as it was governments that pushed them to develop vaccines on the fly. In the event of big problems, the victims will be reduced to suing the states which have assumed this responsibility.

The madness and delirium surrounding the coronavirus is that everyone is looking for a magical solution. We are looking for a single thing that would make all the problems disappear and we could live again as before. Magic wands only exist in fairy tales. To fight a disease, care must be the priority and early management.

Treatments like ivermectin, chloroquine, azthromicin or artemisinin are effective in alleviating symptoms and reducing transmission. We have to use them all. Madagascar must not fall into Western madness, which especially enriches Big Pharma, with strategies that have caused 100 times more deaths than here. Considering how the situation is evolving, it is obvious that lockdown is the next step, but it will not work. And it will destroy the economy even more, an economy that has not yet restarted since the two lockdowns in 2020.

Covid-19 is now part of our lives and we have to live with it, simply wreaking havoc. Yes, there are deaths, but other diseases cause even more deaths. Acceptance of death is the sign of a healthy society and one thing should never be forgotten, medicine is 100% defeat. By dint of living in fear of health, we forget to live normally, so you might as well end it immediately.

This explains the explosion of suicides in the post-covid world. It is a call to the Malagasy government, do not destroy the country because of a virus.