Scientists alter the metabolism of yeasts to produce THC and CBD.

Synthetic biologists have modified brewer’s yeast to produce the main ingredients in marijuana, mind-altering THC and non-psychoactive CBD as well as new cannabinoids not found in the plant itself. Feeding only on sugar, yeast is an easy and inexpensive way to produce pure cannabinoids that are now expensive to extract from the buds of the marijuana plant, Cannabis sativa.

“For the consumer, the benefits are high-quality, low-cost CBD and THC: you get exactly what you expect from the yeast,” said Jay Keasling, professor of chemical and biomolecular engineering and bioengineering at UC Berkeley and professor at Lawrence Berkeley National Laboratory. “It’s a safer, more environmentally friendly way to produce cannabinoids.”

Cannabis and its extracts, including highly inducing THC, or tetrahydrocannabinol, are now legal in 10 states and the District of Columbia, and recreational marijuana, smoked, vaporized, or consumed as edible, is a multi-billion dollar industry to nationwide. Medicines containing THC have been approved by the Food and Drug Administration to reduce nausea after chemotherapy and to improve appetite in patients with AIDS.

CBD, or cannabidiol, is increasingly used in cosmetics, known as cosmeceuticals, and has been approved as a treatment for childhood epileptic seizures. CBD is being studied as a therapy for many conditions, including anxiety, Parkinson’s disease, and chronic pain.

But medical research into over 100 other chemicals in marijuana has been difficult, as the chemicals occur in small amounts, making them difficult to extract from the plant. Inexpensive and purer sources, such as yeast, could facilitate these studies.

Cannabinoids join with many other chemicals and drugs currently produced in yeast, including human growth hormone, insulin, blood clotting factors and recently, but not yet on the market, morphine and other opiates.One of the pioneers of synthetic biology, Keasling has long sought to harness yeasts and bacteria as “green” drug factories, eliminating expensive synthesis or extraction processes common in the chemical industry and by-products. chemicals that are often toxic or harmful to the environment.

Cannabis cultivation is a prime example of an energy-intensive and environmentally destructive industry. Farms in Northwest California have polluted waterways with runoff from pesticides and fertilizers and helped drain watersheds because marijuana plants use a lot of water. Illegal cultivation has resulted in clear cutting and erosion.

Growing indoors under grow lights with ventilation fans consumes a lot of energy, representing an increasing percentage of annual energy consumption. A study estimated that the cannabis industry in California accounts for 3% of the state’s electricity use. Indoor crops have caused blackouts in some cities, and energy use can add more than $ 1,000 to the cost of a pound of weed.

Hence Keasling’s interest in finding a “green” way to produce the active chemicals in marijuana.

“It was an interesting scientific challenge,” he admitted, which was akin to other challenges that he and his team managed to overcome in yeast: the production of an antimalarial, artemisinin; transforming plant waste into biofuels; synthesize aromas and fragrances for the food and cosmetic industries and chemical intermediates for the manufacture of new materials. “But when you read cases of patients who have seizures and are helped by CBD, especially children, you realize that these molecules have some value, and that the production of cannabinoids in yeast could be really great. ”

With the approval and supervision of the US Drug Enforcement Agency, cannabis is still illegal under federal law, Xiaozhou Luo, postdoc at Berkeley, and visiting graduate student Michael Reiter, who led the project , began to assemble a series of chemical steps in yeast to initially produce the mother of all cannabinoids, CBGA (cannabigerolic acid). In marijuana and yeast, the chemical reactions involve the acid form of the compounds: CBGA and its derivatives, THCA and CBDA. They easily convert to CBG, THC, and CBD when exposed to light and heat.

Turning yeast into chemical factories involves co-opting their metabolism so that instead of turning sugar into alcohol, for example, the yeast turns the sugar into other chemicals which are then changed by added enzymes to produce a new one. product, such as THC, that the yeast secretes into the fluid around them. The researchers ended up inserting more than a dozen genes into the yeast, many of which were copies of genes used by the marijuana plant to synthesize cannabinoids. 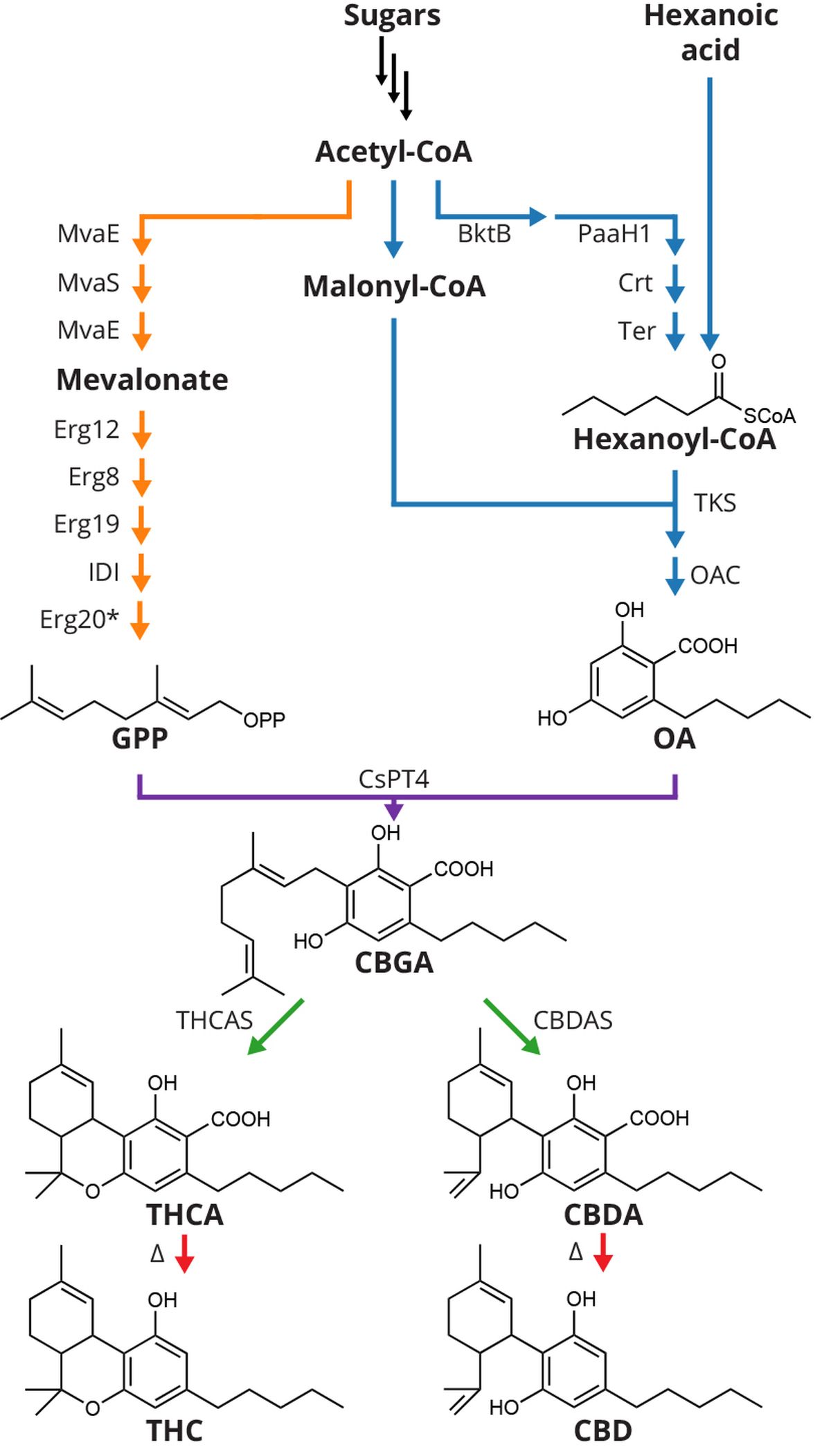 One step, however, turned out to be a hindrance for Keasling’s and competing groups: an enzyme that performs a key chemical step in making CBGA in the marijuana plant did not work in the yeast. Rather than creating a different synthetic pathway, Leo d’Espaux, post-doctoral fellow at Berkeley, and graduate student Jeff Wong went back to the plant itself and isolated a second enzyme, prenyl transferase, which the same, and stuck it in the yeast.

Once they had the yeast-producing CBGA, they added another enzyme to convert CBGA to THCA and another enzyme to create a pathway to CBDA. Although the products produced by the yeast are primarily THC or CBD, Keasling said, each should always be separated from other chemicals present in small amounts.

They also added enzymes that allowed the yeast to produce two other natural cannabinoids, CBDV (cannabidivarin) and THCV (tetrahydrocannabivarin), the effects of which are not well understood. Surprisingly, Xiaozhou and Michael found that the enzymatic steps involved in making CBGA in yeast are flexible enough to accept a variety of starter chemicals, different fatty acids in place of that used by the marijuana plant, the hexanoic acid, which generate cannabinoids that do not exist in the plant itself.

They also obtained yeast to incorporate chemicals into cannabinoids that could later be chemically altered in the lab, creating another route to produce cannabinoids never before seen, but potentially medically useful. Keasling then founded a company in Emeryville, Calif., Demetrix Inc., which Espaux and Wong later joined, which licensed Berkeley technology to use yeast fermentation to make cannabinoids.

“The economics look really good,” Keasling said. “The cost is competitive or better than that of plant-based cannabinoids. And manufacturers don’t have to worry about contamination, for example, from THC in CBD, which would get you high. “